I can't promise I'll write much, but I'll try to be better with the pictures.  I finally downloaded everything off my iPhone so here are some of the more recent photos.   I'll get some videos up when (or if) I figure out why the videos off my phone imported upside down or sideways.  -- Lisa 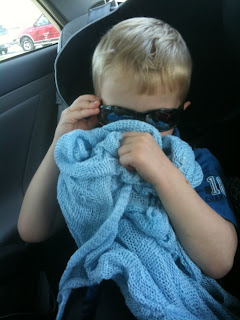 The blanket messes with the cool, kid. 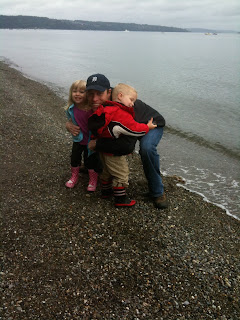 Father's day at the beach. 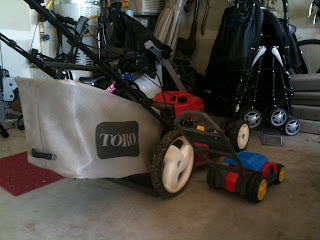 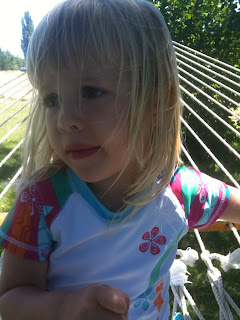 Fun in the hammock at Grandma and Papa's. 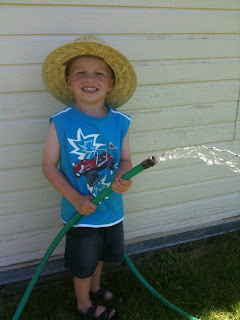 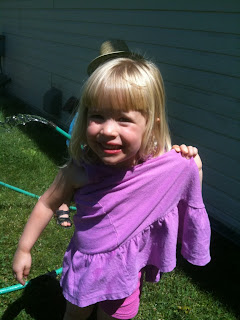 ...cooled off with help from Brother.
Posted by JB at 2:38 PM No comments:

I’ve been blogging here at Cranium Outpost since November 2006.  A lot has changed in 3.5 years.  I went from this blog being mainly about my family, to a lot of stuff about my writing and a little about my family.

The good news is that for those of you who have come here to read about my family, you will now be less bored by my writing related posts.  They’re moving over to http://www.joebeernink.com/blog in an attempt to draw move visitors to my writing related web site, and to ‘consolidate my brand’.  Yes, I am now referring to myself as a brand.  I am really focusing on my marketing platform this year, developing a marketing strategy, and trying to gain both blog and twitter followers in the anticipation of selling my book, hopefully in 2011.

The bad news is that I now have another blog to maintain, and it is entirely likely that Cranium Outpost will be relegated to 2nd or even 3rd place behind that aforementioned writing blog, and DevScape, my technical blog, which I try to keep up to keep my employers happy and my non-writing career progressing.

For me, the change is bittersweet.  I hate stopping doing something that I love to do.  But I also know my blogging time is limited, and it is very important for a blog to be consistent in focus.

So my hope is that people who want to know everything that is going on with me will be willing to check out two blogs.  For those who only care about my personal life and not my writing, I’ll try to update this when things are happening.  Maybe I can get Lisa to do some guest blogging.   For those of you who just want to read about my writing, check out JoeBeernink.com.  I’ll keep that as current as I can, and hopefully you can be part of the beginning of a beautiful new thing.

Weekends can seem long, or they can be long.  It kind of depends on how the kids are behaving, and how much you preplanned to get done during the days.

We didn’t plan a lot for this weekend and the kids seem to be behaving, so this long weekend is both long and a weekend.  It also gives me a minute to get caught up on goings on.

We live on a nice little cul-de-sac in Seattle suburbia, and last night we had a neighborhood Mexican Fiesta.  Nothing says 4th of July like tacos and burritos and Spanish Rice.  After the food came the fireworks.  The kids loved them.  I’m a little split still on the whole fireworks thing.  I think it’s a gigantic waste of money.  But I think aliens cruising over our town last night looking for a good place to set down and commence eating our brains would have decided to move on, thinking, “The little ones here spout fire from their finger tips and the big ones all have artillery in their back yard.  Their armies must be powerful indeed.  Let’s go somewhere easier, like the Middle East.”

The thermometer said it was 65 here yesterday, but that’s a lie.  It was brutally cold for July (now called Julyuary).  The wind was howling, and by the end, people were bringing out their winter coats, mittens and Snuggies to keep warm.

All that fresh air did me in, and I forced everyone in our house inside at 10:00 and I was asleep by 10:15, with fireworks still going on around us.

I’ll try to get some pictures uploaded today, but we’ve been having technical difficulties with my all in one printer lately, so no idea if this will actually happen.

On our docket for today is to go and buy new beds for the kids.  They’re outgrowing their toddler beds, and it’s time to get them big boy and big girl beds in the hopes that they will spend more time in them, especially in the evening, when bedtime is still too much of a fight.

Of course, the likelihood is that the beds won’t fit in their room, and we’ll have to switch them to the guest bed room which is larger, but not painted kid friendly colors, nor does it have the custom closet setup we installed in the kids room before they were born.  So I see that buying a couple of beds is going to lead to a lot more expenses in the near future.

The biggest change coming in the next few weeks will be the kids starting full day pre-school at a local Montessori school. For the last three years, we’ve had a fantastic nanny caring for our kids while Lisa and I work, but the time has come to challenge them a little more intellectually, and try to tire their very active brains out (again in the hope that tired brains lead to better sleep at night).  This switch is going to lead to a lot of other changes for us like figuring out how to pack lunches for them, how to get them out the door by 8:00 every morning, and how to make sure I leave the office on time every day to pick them up after work.  But that was all going to happen at some point, and it might as well be now.

I’ve read just one book in the last few weeks as well - ‘Steampunk’ – an anthology of Steampunk stories edited by Ann and Jeff Vandermeer.  I decided to pick this up to better understand this genre, since I’ve never really spent much time with it.  Results were mixed.  Of the 14 stories in it, I really liked three.  Three or four more were good, and the rest ranged between interesting but not readable, to pretentious crap.  Only my OCD forced me to read the whole thing, and I’d be hard pressed to recommend it on whole to anyone.  I think it probably turned me off reading the genre much further, though a couple of the stories had enough there to make me want to read more of that author’s work.  Specifically, I liked

As I said in my last blog, I’ve been blocked a little in my writing with a section that just doesn’t belong.  I’m in the process of ripping it out, but that’s leading to some other, more subtle plot changes, and that’s taking a while to get done.  I was hoping to wrap it up this weekend, but now I’m hoping for the end of this week.  Then I have to put the book down for a bit and go back to reread ‘The Forgotten Road’, and finish my prep for the PNWA Conference in three weeks.  July is a pretty busy month.

I’ve been cruising through my latest novel and have surpassed the 40000 word mark, which is the magical half way point.  But if I’m honest with myself, I’ve cheated a bit, and that cheating is coming back to haunt me.

You see, three years ago, I started on a book, got twenty pages into it, and stopped.  It was one of those cases where I had a good scene in mind, but no plot to go with it.  It was my first real attempt at writing in half a dozen years, and while that story didn’t go anywhere, the act of writing directly led to me buying a laptop and starting to write on the train, which led to ‘The Forgotten Road’ and my enormous success since then to come.

But that scene and that character stuck in my brain, and last winter, when I was brain dumping plots out into my ‘What If’ file (a file I keep of one sentence ‘What If’ scenarios that might drive a plot), I what if’d a great little idea that could use that scene I had in those 20 pages.   So all along, from the time I started the outline until today, I planned to have that scene in the book.

Well now those 20 pages are in the story.  And they’re bad.  Spilling yogurt on the crotch of your pants at work first thing in the morning bad.  You can get away with it, pretend no one can see it, and cover it up with your jacket all day and say you’re cold, or you can go to the store down the street and buy yourself a new pair of pants and be done with it.  You know you’re going to need a new pair of pants eventually, because blueberry doesn’t come out of light tan Dockers.  And you can pretend all day that no one sees that white crusty smear on your pants, but everyone does, and they are all wondering… what IS that smell?

So this scene, and the premise of this scene is spilled into my story, and the blueberry is sinking in, and the yogurt is curdling, and I’ve been sitting there, knowing I need to rip it out, and take the five to eight thousand word hit, and do it right, because not only is the scene out of place, the writing itself is bad.  My writing is so much better now than it was three years ago, it’s not even funny.  And not only is the writing itself bad, the scene forces the characters to do things and act in a way that they just wouldn’t do based on the rest of the story.  It’s gummed up the whole mess, destroyed the flow, and made a mockery of my outline.

And yet, I can’t figure out exactly what to do different… yet.

So even though I’m at the halfway point of the book, I need to take a step back, and read and edit from the beginning, and see if the momentum picks back up, and see how that scene can be removed.  I need to by new pants.

Of course I’ll make a backup copy first… and I’ve still got that original scene, just in case I can find another place to put it.   I never throw anything (except adverbs) away.

I needed to get this done in order to prep for the 2010 PNWA Conference in July.  I’ve updated some information there, including posting a new short story that I entered in the Wil Wheaton/John Scalzi Fan Fiction Contest to Benefit the Lupus Alliance of America contest.  You can read ‘Under a Molten Sky’ on my short story page.  If you don’t read about the contest first, your first question will undoubtedly be “Why?”, or maybe it’ll be “What the hell?”, but it was a fun contest to enter, and who knows, maybe something good will come out of it.

I’ve also updated the first two chapters of ‘The Forgotten Road’, pending another major edit coming in August, and released the first working title (but no details yet, sorry) to my next novel ‘The Unexplored Territory’.  The title is not the final one.  In fact, I don’t like it at all, but I had to call it something.

So go out, browse, peruse, enjoy.

And by all means, let me know if you find any mistakes or broken things, and let me know what you think of the new first chapters to ‘The Forgotten Road.’