I am amazed this hasn't caught national attention yet? Where is the ACLU? Why aren't they protesting this? This isn't an immigration issue. It's a constitutional issue.

So by taking the train, I've saved myself $5272. I've also been able to cut my insurance bill by $15 a month for driving so few miles, and instead on needing to replace my truck in 2 years, I should be able to make it last another 5. Plus now I'm doing oil changes because three months have passed, not 3000 miles.

Someone told me I could buy a pass on Craig's List for really cheap. Basically I could buy one that is being sold by someone who gets it subsidized by their company. It's technically illegal, but the cards aren't tracked, so no one would ever know, except me. But I'm already saving money, and I'm using public transit, so why shouldn't I pay for it? People looked at me like I was an idiot when I said that, but I really wonder what they think is going to happen if people who use things don't pay for it?

Anyway, I drove today because I had to go to the Department of Homeland Security for my Biannual Biometrics Scan (people who are in process for getting permanent residence get to do all kinds of fun things). I got there just as people started to queue up for a Citizenship ceremony. There were people there from all over the world, with their families in tow, just so happy and nervous to be there. I was lucky that I got there when I did, because by the time I got through security the line was out the door and down the sidewalk.

As I watched them go through the last of the paperwork process, led by a middle aged gentleman who obviously loved what he was doing, I wondered if I would ever decide to take the plunge and apply for US Citizenship. As a Canadian, I can have dual citizenship, and having American citizenship would allow me to take certain jobs, to come and go more freely, and to vote. But I really haven't decided yet. I don't know that I can be two things right now. I am still Canadian, no matter how long I've lived outside the country, I still consider myself Canadian. Perhaps at one time, I wanted to be American more than anything else. And I am happy to be living here, with an amazing wife and incredible children, a nice house and 'the American dream'. But I can't say I want to 'become' American. I can't put my finger on it yet. perhaps someday, my daughter will come up to me and ask me why I don't vote here, and I'll realize that it's time to take the leap. But for now, I'm happy remaining Canadian. Maybe it's because I still have the thought in the back of my head that someone will come up to me and make me an offer to run for Prime Minister of Canada. Since I can't be President in the US, and I haven't gotten them to buy off on me as Supreme Emperor yet, I don't want to bury the possibility of leading Canada at some point.

Oh, and the other thing being on the train has allowed me to do is to read a ridiculous number of books this year. The latest reads include:

The Wandering Fire / The Darkest Road by Guy Gavriel Kay. I don't usually give my sister much credit for good taste in books, but wow. Just wow. If you liked Lord of the Rings, you will love these books (Start with the first one of the trilogy, The Summer Tree). I've never had so many goose pimply moments in a book series. It's almost as good as the Hyperion Trilogy by Dan Simmons, and a heck of a lot easier to read. And as a former World of Warcraft player, let me tell you that there are parts of the game of WoW which are definitely stolen (homage paid to?) from these books.

I also finished the second book of the Steven King Gunslinger Series (The Drawing of the Three), which is pretty good. If you start this series, makes sure you have lots of time on your hands. It's seven books long, and characters from many of his other novels make appearances in these books. When I'm done, I have to go back and reread The Stand and read The Shining (yikes)

And yes, I am using my new laptop to write (not at the moment), but on the train each morning. The creative juices are flowing again, and I'm hoping that writing in a scheduled way really helps me to eliminate my procrastination. I'm already finding I'm cutting back even more on TV in order to read and write. If I could only shake my addiction to 'The Daily Show with John Stewart', I could go entire nights without turning on the tube. It's amazing how at one time I couldn't live without ESPN, now I can't remember the last time I watched Sportscenter.

Those of you who have known me for a while know that I've played Fantasy Football a lot in the last few years. Well it doesn't look like it is going to happen this year. Last year's commissioner embezzled the league fees and got fired from his job for illegally selling airline passes on EBay, and the league just kind of fell apart. So this year, I am just going to try to watch the games for the sake of the games, not the money. Who knows, I may be able to cancel my NFL Sunday ticket soon too. Depends on how much the Lions suck this year.

Well, I was going to read tonight, but it looks like it's bed time, so till I have another update. C ya.

Okay, I got my new laptop half an hour ago and ran to catch the early train home so we can drive out to Eastern Washington tonight. Now I'm sitting here, hands on the keyboard of my new Toshiba Satellite U405-2854, wondering, so what else can this thing do?
Posted by JB at 3:25 PM No comments:

A coworker and I were talking about now that the Olympics and the NFL Season are starting up, most of the American public will divert their attention from Barak O'McCainia to more of what they really care about. I said there is a reason why elections are held in November. People care about football and Christmas presents in Novemeber.

But hold the election on April 15th each year (tax day), and see how much people care about who's running up the biggest deficit in American history. I'm betting there would be major changes a'coming then.
Posted by JB at 7:20 AM No comments: 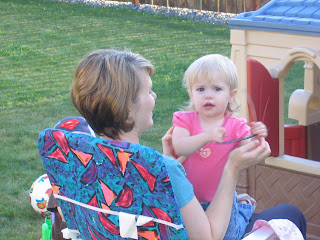 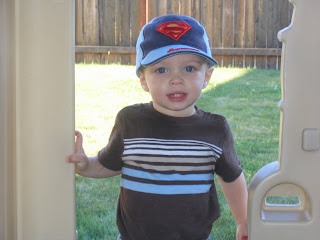 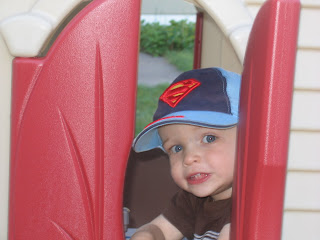 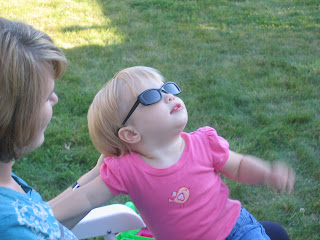 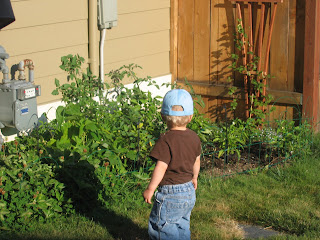 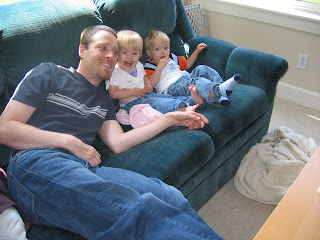 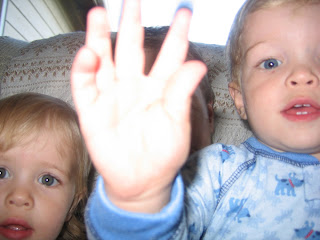 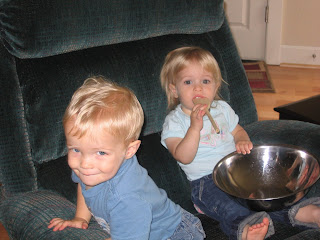 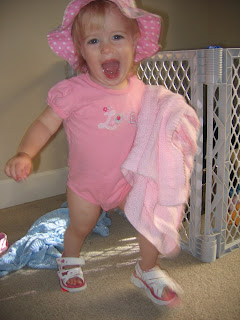 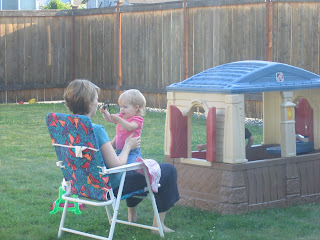 Friday night we had our nanny come over for the evening. Lisa picked me up from work in downtown Seattle, and we had dinner at a wonderful little restaurant called The Palace Kitchen. Quite possibly the best ckicken I've ever had, and I've had a lot of chicken in my life. Then we saw "The Dark Knight" (Aka Batman, again). A pretty good movie. Heath Ledger was great. I would have given the movie 5 stars, but I've found I don't like Maggie Gyllenhal. She just annoys me.

Saturday, a morning Starbucks run, then assembled a new toy for the kids (photos in a bit). They absolutely loved it. Next, a sandbox is on order from Amazon. Lot of outdoor time. I also bought a big shade for the patio / sandox so the kids can be out there without SPF 1000 every day.

Today was more backyard fun. There's a lot of teething going on in the house right now, and Lorelai hasn't been her cheery self quite as often as she used to be. Molars are painful, I guess.

The rest of my time I've spent looking for a new laptop computer. I'm currently leaning toward a Toshiba U405-S2833, with the thought that I could carry it to work each day without breaking my back, but I'm not sure I can justify the expense. What if I never use it? Anyway, I'll stop writing now so I can try to post some pictures.
Posted by JB at 9:18 PM No comments:

I don't know who gets the credit for this one, but this is just great.