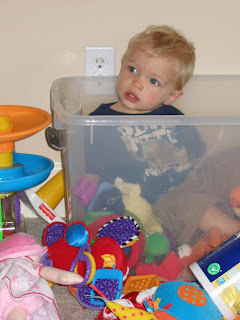 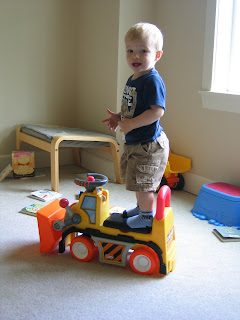 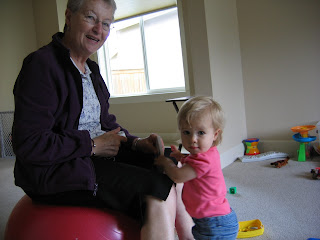 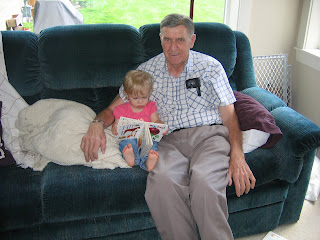 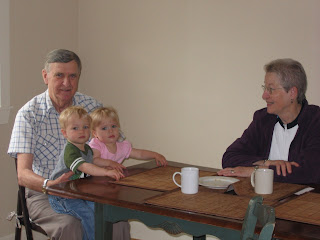 Here are some recent pictures

Okay, it's been a while I guess, but it's been for good reason. I've spent all of my spare time the last 5 weeks or so, working on putting together DVDs of the kids first 17 months for posterity, and let me tell you, that's a lot more work that you think it is when you get started. We weren't very organized in the first few months, and the pictures and videos just kinda stacked up, so I had to locate them all, organize them, add them to the video software I bought, which then crashed every time I tried to burn to DVD, until I got a patch from the manufacturer to fix it. Then it was a matter of finding the right music to go with the videos, made harder by the fact that you can't add music you bought from ITunes to a video, because of the Digital Music Encoded copyright embedded in the download. One of the many reasons why I am now using Amazon.com for music downloads.

Anyway, I'm just about finished with that project. I just have to find the music for the final hour of video, burn a few more discs, and we're all good, as long as we don't fall so far behind next time. If there are any budding video editors who want some experience editing together clips of really cute kids interspersed with liberal shots of the carpet, the ceiling and people's feet, have I got an opportunity for you!

Other than that, I completed my first major ebusiness web site rollout for a client last week, which meant putting in a few more hours than normal, but not nearly as many extra hours as I use to work when I had to worry about planes falling out of the sky, so it wasn't a big deal.

The kids are just wonderful these days. This morning, when Lisa was feeding them, Reece blurted out 'baby' for the first time when he saw a picture of a baby on a box of Baby MumMums. They're learning to drink from cups with straws, which they love to do because there is even more water to spill down their fronts. With as hot as it has been here (mid 90's yesterday), we didn't think they were getting enough water, so we had to try something new. They've got enough now.

Lorelai is being absolutely adorable all the time. If she burps, she covers her mouth. If Reece burps, she covers his mouth. She loves to talk (baby talk mostly) and sing, and we're pretty sure we're picking up patterns in the words that sometimes sound like real words. She definitely has a word for Reece, but I don't think humans are supposed to make that sound.

We had my folks over for a week two weeks ago, and Lisa's mom spent the weekend here, and the kids just love having grandparents around. They get a little bit spoiled for attention, but it's not as bad as it used to be.

I've still been doing a fair amount of reading, since I'm still riding the train ever day. Here are my latest book and movie reviews

Shake Hands with the Devil - Story of Genocide in Rwanda, as told by the Commander of the UN Forces in Rwanda. This book was shocking in it's detail and it's coverage. I highly recommend this book, but not for the faint of heart. I had dreams about, and needed some downtime after reading it. I almost broke into tears on the train to work one morning.

From a Buick 8 - Steven King - A quick read about Pennsylvania State Patrol Unit, and an old car kept in the garage behind their barracks. Good story, likable characters, good read.

The Summer Tree - Guy Gavriel Kay - My sister loved this book, and I liked it a lot too. It takes about a hundred pages to really get into it, then it becomes very good. I've got the next two books on order from Amazon.

The Gunslinger - Steven King - The first book of the Gunslinger 7. Interesting read, not the best book I ever read by King (i.e. The Stand), but right along the lines of what you might expect. I hear it gets better in the next 6 books.

Janet Evanovich - Motor Mouth - fast, fun read. There aren't too many chick books I will read in public, but JE writes good books for just throwing the world away for a little while and relaxing.

Jasper Fforde - The Thursday Next Series - I'm into book four of this series now, and though it's a more difficult read, all I can say is that this guy is a genius. I've never read such original, funny, thought provoking material before. Start with The Eyre Affair, and keep reading. It's science fiction, and it's a little work, but damn good stuff.

As for movies, it's been some slim pickings, but here's the good and the ugly

IronMan = Good fun, would watch again. Wish this movie had come out when I was a kid. Makes me wonder what I missed by not reading comic books

Into The Wild = Thought provoking, depressing and overly long.

The Darjeeling Limited = didn't really get it, but at least it held my attention

Juno = Awesome movie. This biggest issue I had was that the damn song stays in your head for days

Shawn of the Dead = Good movie. Simon Peg is a genius

I am Legend = horrible. Turned it off half way through

There Will be Blood = Really didn't like it. I admire the artistry, but ehhh, wasn't my cup of tea.


Anyway, that's what I have been up to. I'll try to post some pictures soon.
Posted by JB at 7:47 PM No comments: