Hello, Everyone! It's Lisa with a guest blog entry. Joe's sister, Cindy, purchased a new camera and was kind enough to give us her fabulous "old" one. I think she got tired of our slow fuzzy pictures taken with our old digital. I don't blame her. I did, too. Now I actually enjoy taking pictures and am getting MUCH better shots. So, watch out - we may now overload you with pictures. Ok, promises, promises. I recognize it is one thing to take better pictures, and it is another to actually stop the laziness and post them. Well, for now here are a few pictures of two great fall activities of late... 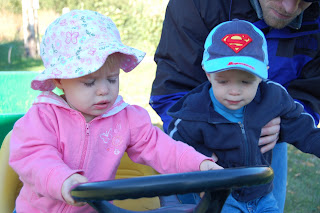 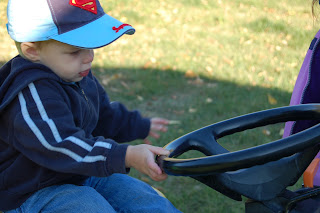 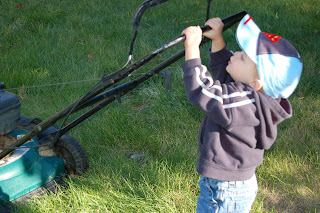 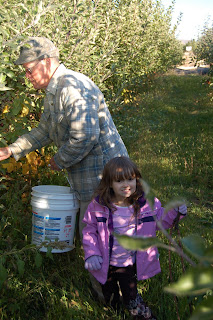 That last one is of cousin Victoria and Grandpa in the orchard. Note to my family members -- I took a number of family pictures. Check out the Flickr site here http://www.flickr.com/photos/taleof2/sets/72157608215328819/ for the entire group of photos. Mom, the pictures of your flowers can be found there as well.

Reece and Lorelai at the Pumpkin Patch: 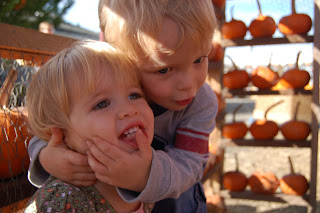 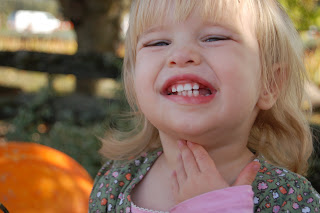 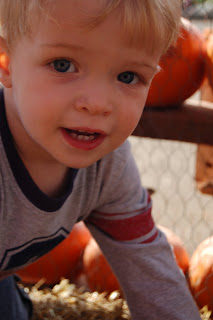 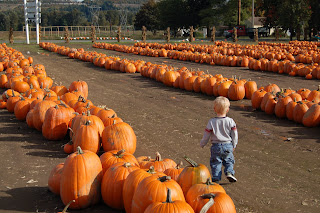 Pics from the Trip

So, I don't know how this happens, but every time we bring out the camera, my mother disappears. We haven't got one shot of her with the kids. Hopefully, someone else got some. 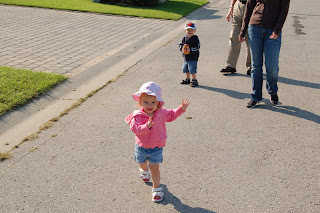 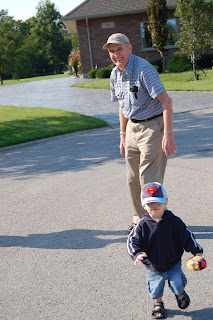 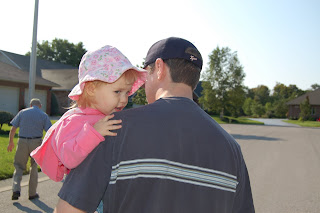 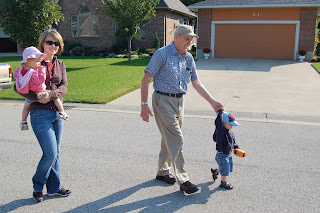 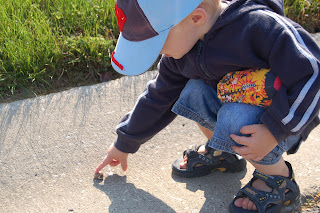 Okay, I admit it, I'm not the most reliable blogger, and I'm always full of excuses. Another month has gone by without an update, so I beg your forgiveness, we'll see if I can get you caught up.

In mid-September, we took the whole family for a trip back to see my folks in Canada. We had planned for this long trip for months, and though we looked forward to being there, we were filled with all the fear out hearts could hold when we thought about the actual trip.

It's about 45 minutes from home to the airport. It's a 4 hour flight from Seattle to Detroit. Then it's a two hour drive from the airport to my parent's house. Combine that with getting through security, and getting a meal at SeaTac, and getting a rental car and getting the child seats installed and getting over the border, it makes a for a very long day.

We also had one of the bitchiest TSA agents in SeaTac I had ever come across. I try to put a smile on my face when I go through security, but the system they have set up there must have been designed by complete and utter morons. You show your id and boarding pass to this guy, and 15 feet further on, you have to go through the whole process again while your carry-on baggage goes through X Ray. And if your passes happened to get into the little tray the give you to put all your crap into while you're struggling to corral 2 little toddlers, you get an earful from the TSA, adding to the stress of an already stressful event. I was half tempted to hand one of my kids to her and ask her to hold on while I found my passes.

After a quick lunch of Burger King (yuck in the worst way, but it was the only option in the decrepit hole that is the SeaTac South Terminal), we boarded the flight and hoped with all our might that the kids would fall asleep at some point during the trip. No luck.

While they weren't the worst I could have imagined, they did go a bit stir crazy and I swear Reece was trying to tunnel out of the plane somewhere over South Dakota.

We spent four full days at my folks house, which doesn't seem like a long time, but we packed a lot into those days, and saw as many relatives as we could. The kids just loved all the attention, and went into major grandparent with drawl when we got home, and were real little pains in the pa toots for days.

Reece came down with a cold on the third day, and Lorelai followed the next day, and it hit me the day we flew home, which made the airplane ride even more fun.

I ended up staying home from work the day after we returned as I was so sick I had trouble getting out of bed and couldn't talk for all the coughing. Luckily Lisa didn't catch the cold / flu or whatever it was, and was able to get everyone else healthy again.

We've been trying to get back to our normal routine the last couple of weeks, though this weekend we took a trip out to Lisa's parents' house to make apple cider and see the whole family. I think we had 15 kids running around at the peak of the activities yesterday, and by 9:30 PM, everyone was in bed, exhausted. Kids were passed out on the floor of the living room as the rest of us adults talked about how George Bush had screwed up the country the last eight years. At least that's what I was talking about. I think the rest were talking about something else, being the Republicans that they are.

The cider is really good light and sweet when raw, and event better when cooked with cinnamon sticks and cloves. That's an awesome treat on a cold day.

Those have been the big events, but things seem to be busy every day. I've been writing in every spare moment, and my latest work is closing in on 100 pages, and though I'll have to do some heavy editing, I really like how it's going.

I haven't been reading quite as much these days as I've been writing on the train to and from work. I did read a book 'Playing for Pizza' by John Grisham in a single day while at my parent's place. Not a bad read, perfect for a plane ride or a lazy day in a recliner.

I also read 'Wizard and Glass' by Steven King, the fourth book in The Gunslinger Series. Its a long book, but a good story.

As for movies, we watched 'Smart People', (2.5 Stars, not bad, and not as depressing as it could have been) and The Last Legion (1 star, really bad movie) and 'A Guide to Recognizing Your Saints', (2 stars, a ratty narrative, all torn up and hard to like).

Lisa has been teaching again at one of the local universities, so that has been taking up a lot of her spare time. Building up a syllabus, grading papers, reviewing lecture notes all takes a lot more time than you'd think.

The kids have been pretty good, though the aforementioned colds have been a royal pain. Kids get really needy and regress in their independence when they are sick, only now they are a lot heavier than they used to be, and carrying them everywhere is back breaking. Lorelai has been getting very precocious, if that's the right word for not listening to anything we say, and fighting everything we do.

They're picking up a lot of words now, many just after hearing them a couple of times, like 'Yahoo' and 'apple'. They're pretty shy at first around strangers, but if you offer to read to them, you won't get them off your lap, unless they get up to go get another book. Lorelai's favorite word is 'read', which she says over and over again until you give in. It was cute, at first.

The next couple of weeks should be a little more low key. It's time to clean up the back yard and to clean up the flow pots and vegetables killed by the cold weather. It shouldn't take long, but it's just a matter of finding a couple of hours where the little munchkins are gone or sleeping.

Lisa and I are also happy to announce that we will have a new arrival soon, in our house. No, not more kids. Furniture. Real furniture. We finally broke down and bought a new couch and two chairs (with ottomans!) for the living room, and we've found an decorator who understands what we are looking for and actually has taste (we think). We've been in this house now for 3.5 years, and except for a little bit of bedroom furniture, we haven't bought anything for the down stairs. It'll take us a while to finish, as we're trying to do this on a budget, but get good stuff at the same time, but now we will be able to have more than 3 people in our living room at a time without having people sitting on the floor. We can't wait!

Okay, we have a lot of new pictures to post, and I hope to get that done this week. And again, I'll try to update this more frequently.
Posted by JB at 3:39 PM No comments: