Last night, for the first time, both babies slept through the night! Reece and I had a little argument before he went to sleep about how Daddy wasn't carrying him around enough. Mr. Grumpy Pants turned into Mr Temper Tantrum pajamas, and Daddy wasn't putting up with that either. If he was going to howl and wail like someone had just stolen his lolly pop (or maybe his kidneys), then he was going to howl in a room by himself while Daddy did dishes. After about 40 minutes of howling at the top of his lungs, he broke, and went from mad to sad. Sad is fixable. Mad is not. So daddy fixed the sad, got him pretty much to sleep, and mommy finished the job.

That was at 8:00 pm. The next sound we heard from both was at 4:30 AM, when they both woke simultaneously, even though they were in different rooms. For Mom and Dad, that was 8.5 hours of solid rest and relaxation. Niether of us is used to that anymore. We were both kinda waiting for them to wake up in the middle of the night to justify getting up to use the facilities. Let the record show that Lisa broke first.
Posted by JB at 9:13 PM No comments:

If you have read the Purple is a Fruit blog at all, you know that a really fun game to play with kids is to hang them upside down by their feet and yell "POSSSUUMM!". The key thing to remember is that there are times when you shouldn't do it. Immediately after they suck down a belly full of milk, and you have them suspended over your face, and your wife is feeding the other baby, and so engrossed in a book that she doesn't even hear your cries for help... that's pretty much the situation described by the term: Impossumable.
Posted by JB at 9:09 PM No comments:

Videos of Giggles and Eating

Back Aches and Strawberries

I hear that blog s are supposed to be a daily thing. At least some people think that. But around here, weekly is about all I can manage to do. I could probably do it daily, but my wife got me addicted to Spider Solitaire on the computer, and it's my mental wind down every night after the babies go to sleep. As soon as I win a 4 suite game (without cheating), I'll stop, I promise.

What's worse than parents not getting sleep? Babies not getting sleep. Reece went a couple of nights with long periods of being awake in the middle of the night. Yesterday was a disaster. He was grumpy from about 11:00 AM on, wouldn't nap, and by 1:00 PM we were counting the minutes to bed time. Even walking him around, letting him dance by the keyboard, activities which usually result in happy (or at least sedate) baby, didn't work. It is kind of funny to watch a screaming baby do the Salsa, but not really. Yes, he can be in temper tantrum of epic proportions, but he still dances.

So we made some changes to the bed time routine last night. Lorelai slept in our room last night in the co-sleeper. She's become a pretty good sleeper now that we've started putting her to bed on her tummy, despite all the warnings in the books. She can really raise her head up any time she wants, and will roll over from time to time anyway, so we're not worried about that anymore. She usually sleeps for 7-8 hours at a stretch.

Reece slept in the babies' room last night in the crib. The babies have been sleeping there for the last week or so, so that wasn't a big deal, but last night we decided to wake him up when Lisa went to bed to get one more feeding in, then we put him back down, with the hope that he wouldn't wake up for at least four hours. He had been getting up at 11, 1, 3, 5 and 6, with the 3 AM one lasting for an hour or so. Last night he skipped the 11, woke up for a quick feed at 1:30, skipped the 3 and was up at 4:30. That's a huge change for us, and we actually feel like we got sleep.

The next step is to get him to skip the 1:30, and to do that, we're going to walk him back to sleep instead of feeding him, and if that doesn't work, we'll have to do the dastardly deed of letting him cry it out for a few hours. I hear it takes about 3 nights to break an infant of any bad bedtime habit. I think I'll wait to do this step until my parents are here next week, sleeping in the room next to the babies, so they can enjoy the experience too.

After yesterday's hauling of Reece around all day, my back is killing me. I've had a history of problems with my sciatic nerve, but it's been a couple of years since it really flared up. Apparently lifting a 16lb baby a thousand times a day is a recipe for disaster. I've got an ice pack on now, Ibuprofen at the ready, and a hot bath available if things get desperate.

We did get to enjoy the first fruit of our garden this week. A single, nickle sized strawberry. It really wasn't that good, compared the bunch we bought the weekend before from the farmer's market. It was kinda puny and dry. But hey, we're on our way to being self-sufficient!

As to why we are home, and not in Eastern Washington this weekend? The cough and fever the twins had, morphed into a rash that covered their entire bodies, caused Lorelai's face to become puffy, and generally made them uncomfortable. It was pretty much gone by yesterday morning, but there was no way we were driving 4 hours with 2 sick kids, into 100 degree temps in Eastern Washington, and then turning around and driving back the next day. We may be insane, but we're not masochists.
Posted by JB at 9:17 AM 1 comment:

Okay, I know this is un-American, and probably just anti-fun, but I hate fireworks. Let me clarify. I hate fireworks in the hands of ordinary people. In the US, the 4th of July traditional fireworks last about 2 weeks, starting in late June, and going until the budget of every idiot that hasn't lost all their fingers is blown. Everything from sparkler's to 1/4 sticks of TNT goes up in smoke. All day, and all night. It doesn't matter whether it's bright and sunny, there are fireworks being set off.

In Washington State, there are 2 types of fireworks: legal, and illegal. Technically, it is illegal to buy, possess, or shoot off anything the goes up or goes boom. What's left are sparklers and whizz bangs. But yet, every night, things go up, and go boom.

How is this possible, you ask? Thank the goddamm 'First Nations'. i.e. the Native Americans, who can pretty much do what they want, and sell what they want because American state laws don't apply to them. So they set up shop on their reservations, next to their casinos, and sell every Tom, Dick and Harry enough explosive power to take out the Russians. Their shop fronts are nothing but plywood counters painted with catchy slogans like 'Il-Eagle Fireworks', or 'Smokin John's Hole in the Ground'. When the sales are done, they leave the ground covered with cardboard, plastic and beer bottles, and wait for the city to come in and clean it up. Obviously they're the stewards of the land, just like their ancestors. What a crock of shit.

So the locals drive out to the reservations, load up their SUV's with things that go boom, set them up on the streets in front of their house and hand a lighter to their kids. The police watch and say ooh, and ahh, and doing nothing until someone gets hurt. Last year, an entire elementary school in Kent, WA burnt to the ground while a crowd of onlookers cheered for the show.

Why does all of this piss me off so much?

1. Last year, after the 4th, I found a spent 18inch rocket on the roof of my house. No the chance that this could have set my house on fire is small, but I'm sure that's what the people in Kent thought about the ones they were aiming at the school.

2. This year, before dusk, I found another 18inch rocket in my driveway. Not sure where this came from, since my driveway is in the back of my house, and to get there, the rocket would have had to fly all the way over either my house or the house behind mine.

3. I now have 2 kids in the house who go to bed around 8:00 PM. So far, we've had one very cranky wakeup, which probably isn't the last for the night. Both Reece and Lorelai have been pretty sick the last 24 hours, with rashes that cover their entire bodies, and a few bouts of puking, usually projectile vomit onto either Lisa or the carpet. Needless to say, with the fireworks, and the sick babies, the last few nights have not included pleasant dreams.

Anyway, I'm hoping that people start wrapping it up pretty soon so I can get some sleep. It's just amazing how normally really nice people can become such idiots because of tradition. Damn Paul Revere and the freakin horse he rode in on.
Posted by JB at 9:51 PM No comments:

It's been wildly crazy the last couple of weeks. Lisa's brother Mark, his wife Judy, and their daughters Allison (8) and Amy (11 months) stayed with us for a bit last week while Mark and I attended one of the Lisa's family traditions, Nerdfest, in Ephrata. Lisa's mother Marcia came out to help with the kids here while I was gone, but I only lasted about 9 hours at Nerdfest before I headed back. Still, with 4 kids, and 4 adults in the house, we were kept very busy. Our house is not yet childproof, since our kids aren't crawling yet, and certainly isn't 8 year old proof, but I was given a sneak preview of what it's going to take to do both. Bye Bye 50 inch TV. Hello cabinet locks, stair gates and a formal playroom.

The babies have both not been feeling so well this week, and their schedule is a bit off. Which means we had one good night of sleep in the last 3 weeks. Most disturbingly, they are tending to both be up at the same time now, so we're both up most of the night. I thought the days of 3 hours of sleep were long gone. They're backkk! And, no, I don't want to hear about anyone getting 20 hours of sleep in a two day period. That's a week's worth for me.

This weekend, we're headed to Eastern Washington to Lisa's Family's annual ho-down. We're only going to go for one night, and hope to god the babies sleep a little bit in the car each way. I totally understand why people put DVD players and TV's in their vehicles for the kids to watch. I'm dreading the drive, and I usually like long car rides.

I'll let you know how the trip goes when we get back, after I regain my sanity that is.
Posted by JB at 8:54 PM No comments:

My Son, the Party Animal 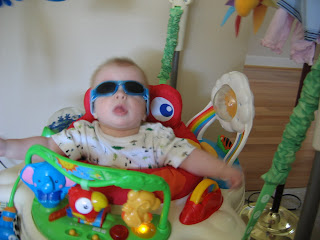 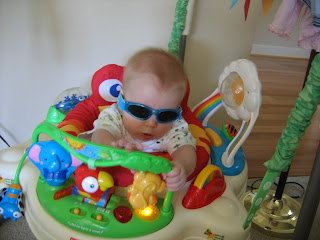 Since we're heading out to Eastern Washington this weekend, we thought it would be a good idea to get the kids sunglasses. Of course, we had to test whther or not they would stand having them on their heads. As you can see, no problemo.